The Ronquist lab is an interactive and interdisciplinary environment, where we focus on innovative research at the interface between statistics, computer science, evolutionary biology, and insect diversity. We have co-authored some of the leading software packages for Bayesian analysis of phylogenetic problems, and continue to develop new computational approaches, models and inference strategies. The current focus is on universal probabilistic programming. In our empirical research on insect diversity and evolution, we also strive to explore new directions. Recent examples include deep learning for automated image-based identification, improved methods for finding genes linked to life-history changes, more efficient molecular techniques for rapid species discovery, and genetic analyses that scale so that we can analyze the composition and function of entire insect faunas and their associated microbiomes. 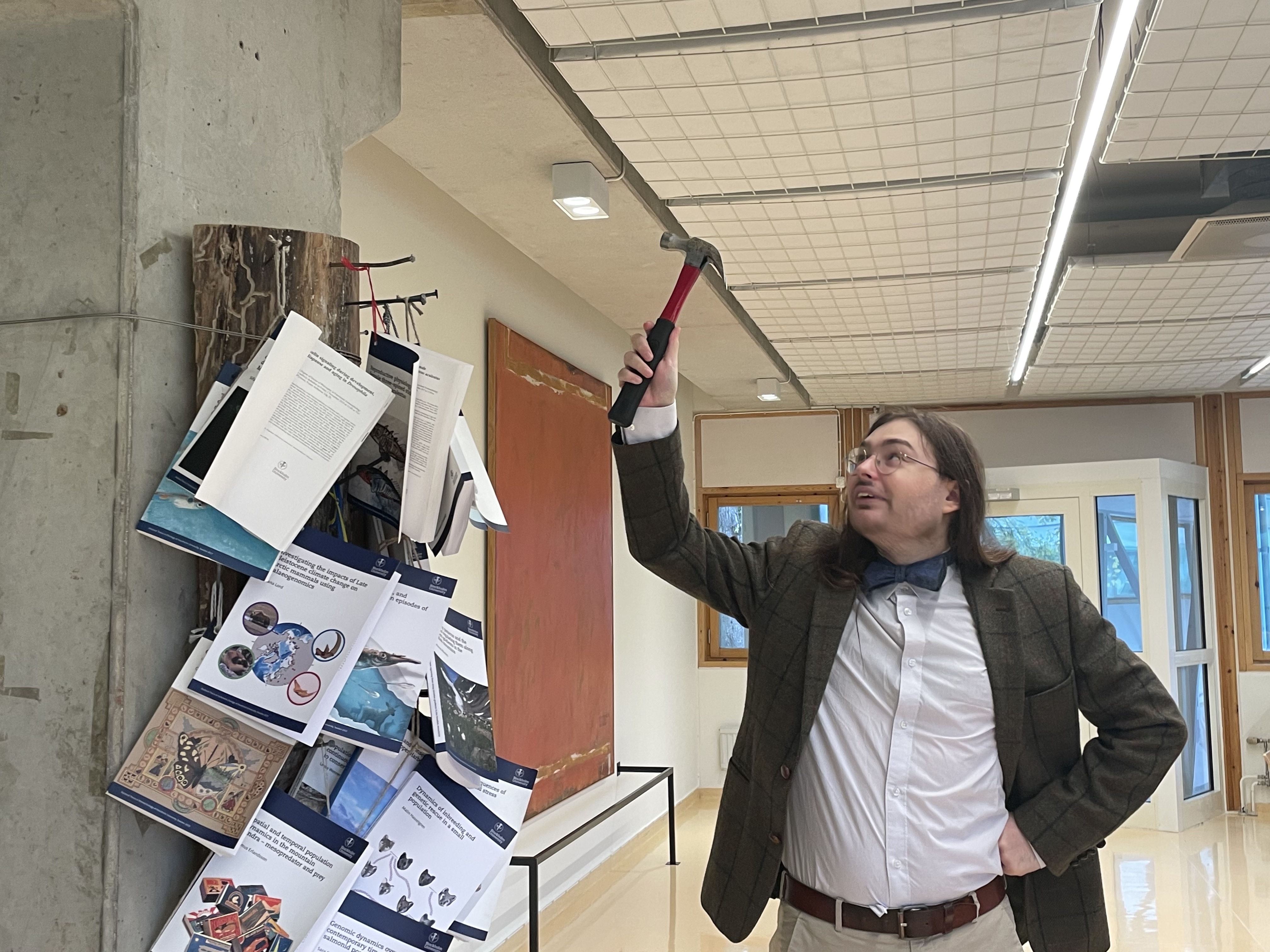 As required by the Stockholm University's tradition, all PhD theses need to be nailed in a public place before the defence so that the wide audience can read it and comment. Today Erik Gobbo nailed his thesis titled "Gall induction n gall wasps (Cynipidae s. lat.) - Insights from comparative genomics" at the Department of Zoology. The defence will happen on the 26th of October 2022 at 9h in Vivi Täacholm room. 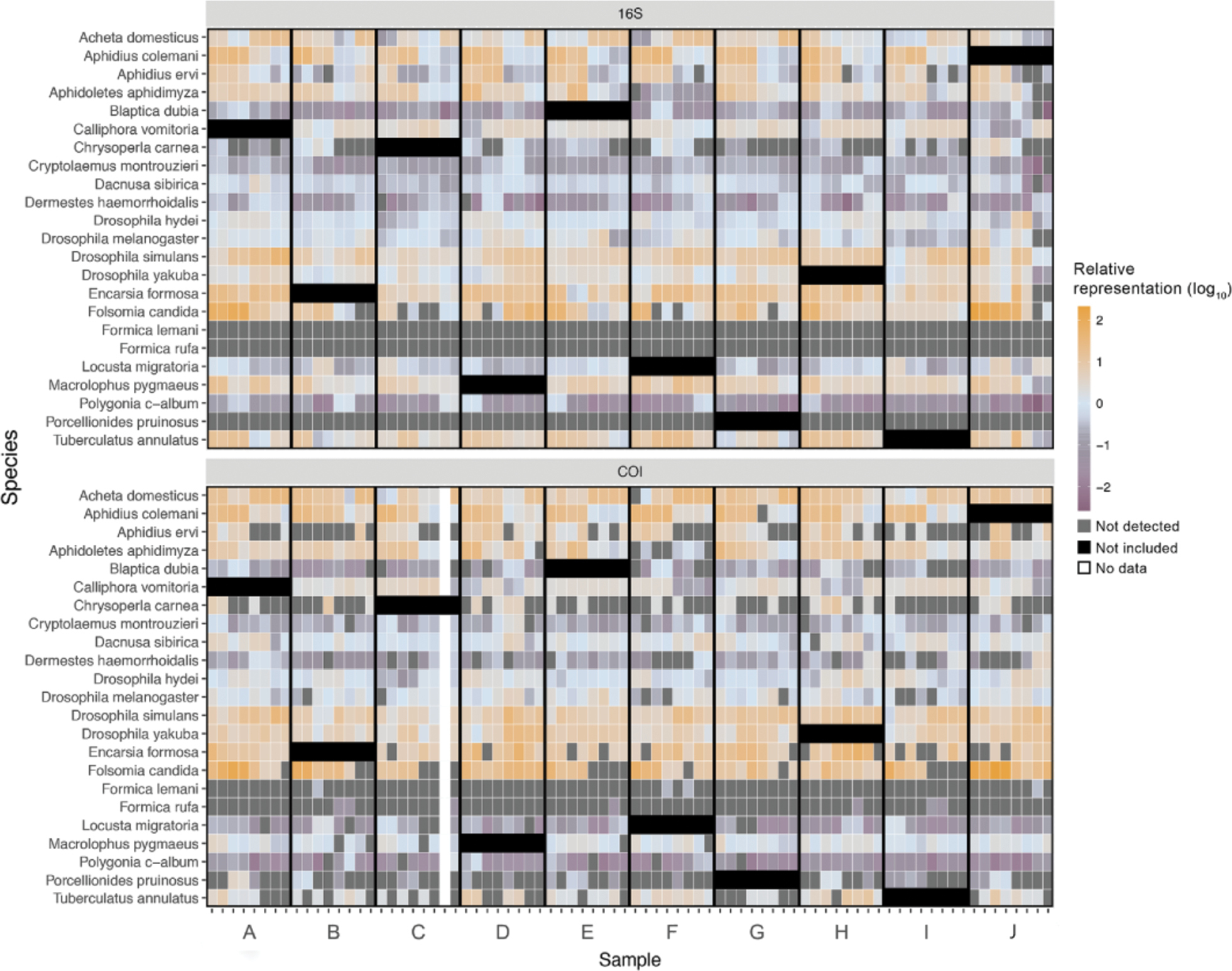 One of the group's goal, to make use of massive molecular identification methods (DNA metabarcoding) to facilitate and accelerate taxonomic work in the most optimal and efficient way, usually conflicts with the taxonomic work itself. This is because most protocols for metabarcoding require the destruction of the insects to better extract the DNA from them, making it impossible to conduct any morphological examination on the individuals. In a paper recently published in Metabarcoding & Metagenomics, we continued exploring and optimizing protocols for the non-destructive extraction of DNA from samples with a mixed community of insects. In this study we tested different lysis buffers, incubation times, and post-lysis purification of the DNA, and how these factors affected not only the metabarcoding output, but also the preservation of the morphological features of the insects. We found that the most optimal protocol consists of a mildly aggresive lysis buffer (low concentration of proteinase K, without other proteolytic compounds, lower concentration of membrane-breaking surfactants) and a short incubation time, regardless of whether a manual and labour-intensive purification or an robot-automatic one is used. This combination not only maintained better the morphological characteristics of the insects, but also produced the most accurate estimations of community composition, compared to the other protocol combinations. Fortunatley, this is also the cheapest (lower amount of reactives needed) and fastest of the tested options! 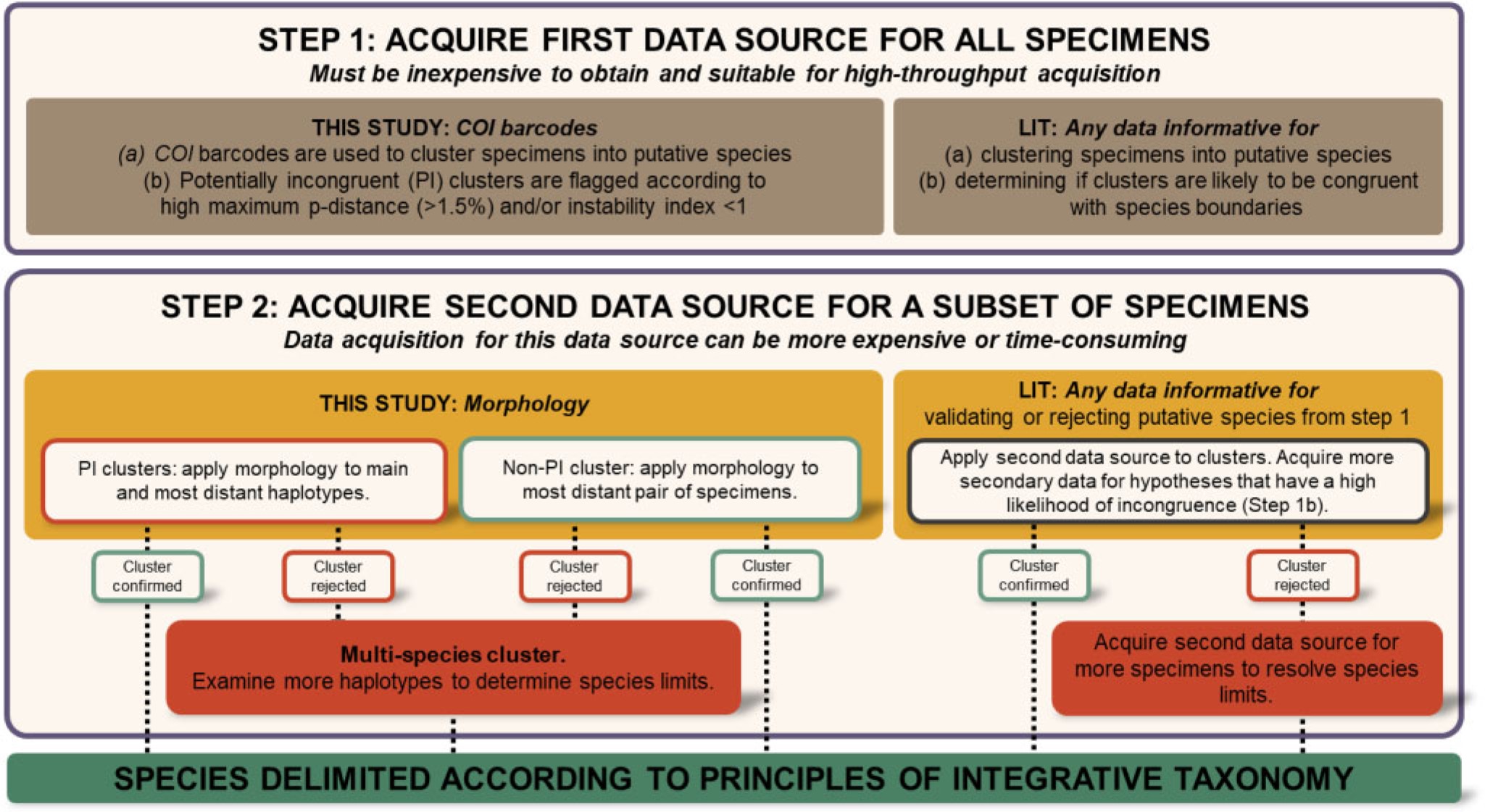 Large-scale integrative taxonomy (LIT) is a new, rapid, systematic and objective species delimitation method specifically designed for tackling “dark taxa". Dark taxa are defined in the paper as groups for which <10% of all species are described and the estimated diversity exceeds 1,000 species. Due to the sheer numbers of species and specimens in these groups, coupled with the complexity of both molecular and morphological species determination, multiple data sources must be used to delimit species ("integrative taxonomy"). To make collecting this much data an efficient and scalable practice, LIT relies on preliminary species hypotheses that are generated based on inexpensive data (in the paper, COI barcodes) that can be obtained quickly and cost-effectively. These hypotheses are then validated using a more expensive type of data that is only obtained for specimens selected based on objective criteria applied to the preliminary species hypotheses (in the paper, morphology). The paper developed and tested LIT using a dataset of 18,000 scuttle flies (Diptera: Phoridae) that were first grouped into 315 putative species based on barcode data. Using LIT, approximately 1000 specimens (6% of total) were selected for morphological examination. LIT reveals that it is possible to predict the molecular clusters likely to be incongruent with species boundaries, and to objectively pick a small subset of specimens to use for validation. 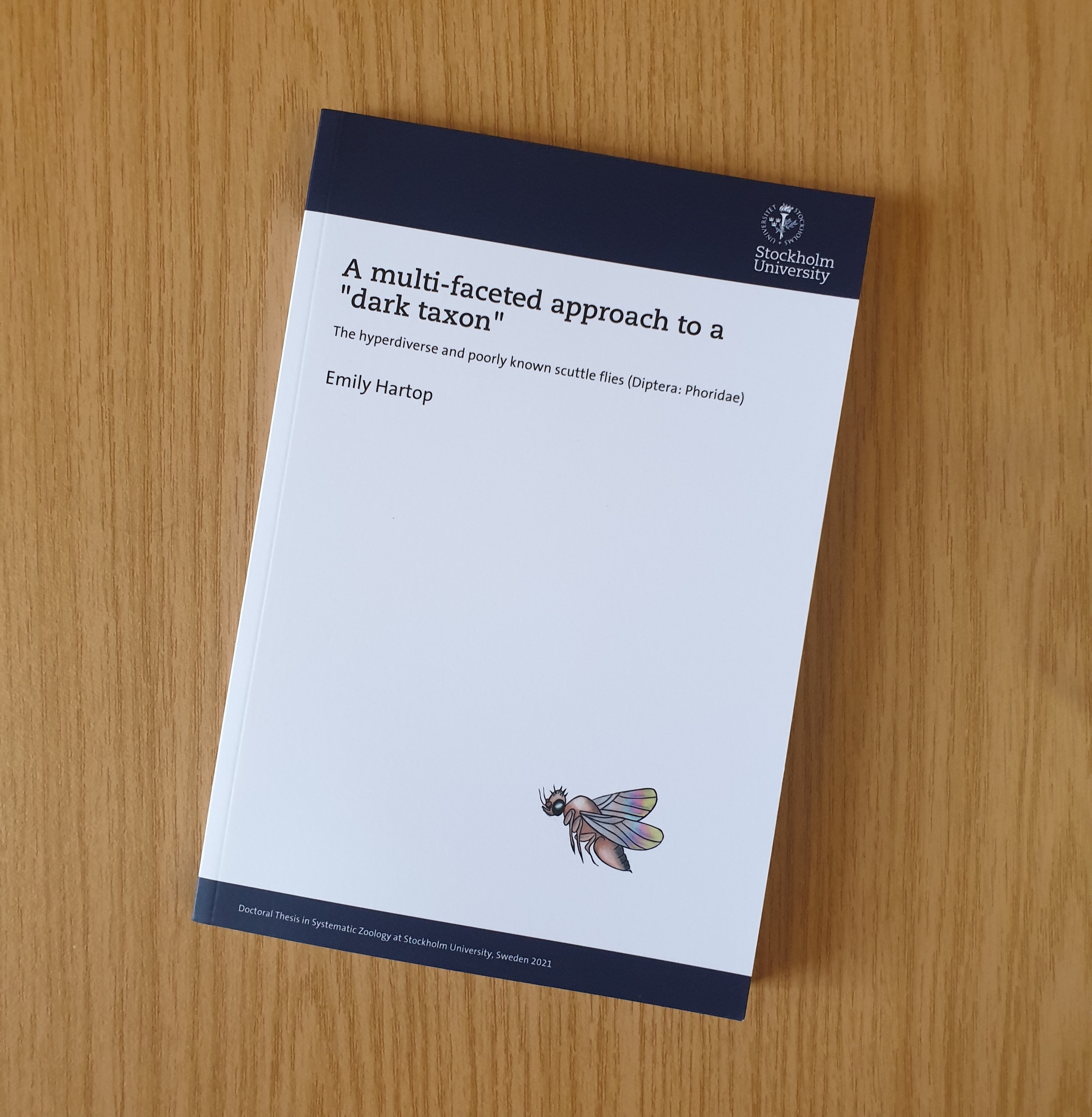 On the 8th of June Emily Hartop successfully defended her PhD thesis: A multifaceted approach to a "dark taxon". A dark taxon is a hyperdiverse yet understudied taxonomic group. Her work focused on the scuttle flies (Diptera: Phoridae), including for example a comprehensive molecular phylogenetic analysis on the scuttle fly genus Megaselia, as well as method developments for large-scale species discovery and description.

Emily is now a researcher on Hyperdiverse Diptera at the Museum für Naturkunde in Berlin. 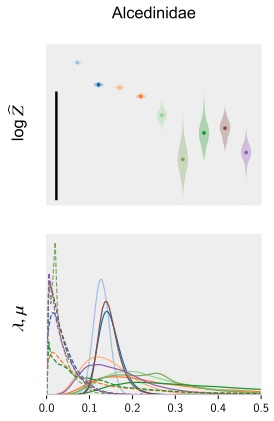 The field of probabilistic programming is currently in a phase of experimentation, and few hurdles remain before these techniques can be effectively applied to the full range of phylogenetic models. 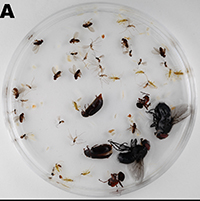 The paper is the result of a collaboration between our lab and the Symbiosis Evolution group at the Jagiellonian University in Krakow. 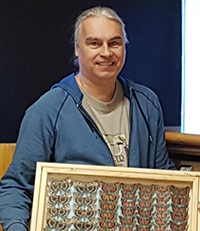 On February 11, the Royal Swedish Academy of Sciences announced that they were awarding the Sture Centerwall Prize to Dave Karlsson, PhD student in the Ronquist lab and Manager of Station Linné, for his dedicated and tireless work in documenting the Swedish insect fauna, and in reaching out to the general public and raising their awareness of insect diversity and the importance of insect conservation.

Read more about the award on the Academy web site here. 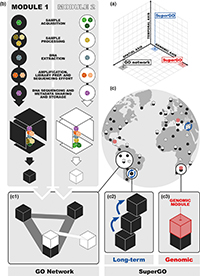 High-throughput sequencing methods are revolutionizing biodiversity monitoring. In a perspective piece published today in Molecular Ecology, resulting from a November 2019 workshop in Cyprus, we contribute to recommendations for how current and future projects using these new approaches to study biodiversity can be more effectively connected to provide a site-based genomic framework for global integration and synthesis.

The scuttle fly genus Megaselia is one of the most species-rich in the animal kingdom, with roughly 1,700 described species and probably at least an order of magnitude more species remaining to be discovered. In large part because of the enormous diversity, phylogenetic relationships within the genus are still very poorly known, complicating further taxonomic work on the radiation. In a paper appearing online today in Systematic Entomology, we present the first

comprehensive molecular phylogenetic analysis of relationships within the genus.

We find that most of the species diversity of Megaselia is found within a “core” clade. Future restriction of the genus to this lineage would render it monophyletic but it would necessitate the recognition of a few lineages outside of the core lineage as separate genera.

Within the core Megaselia, we identify twenty-two well-supported species groups. This establishes an important phylogenetic scaffold based on DNA sequence data that will facilitate future exploration of the radiation. Nevertheless, many relationships within the genus will continue to be poorly resolved until it becomes possible to significantly expand both the species representation and the amount of sequence data. 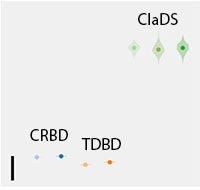 We are looking for a postdoc interested in developing new modeling and inference tools based on universal probabilistic programming, an approach that has attracted considerable attention across scientific disciplines in recent years. Specifically, we will be developing a domain-specific language to describe phylogenetics problems, and design new inference strategies for such model descriptions. The goal is to successfully tackle some of the most challenging research problems in statistical phylogenetics and phylogenomics. For some early success stories, see our recent paper on bioRxiv. The postdoc will be encouraged to develop new projects, apply for third-party funding, supervise students and lecture at courses. Read more and apply here. Application deadline December 18. 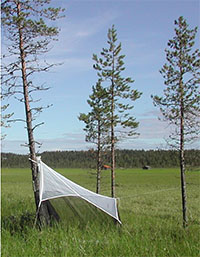 The Swedish Malaise Trap Project (SMTP) is q unique contrywide inventory of a national insect fauna. The field campaign was completed in 2003-2006, and sampled the insect fauna at 73 different selected sites across the ccountry using Malaise traps. The entire catch is estimated to contain some 20 million insect specimens. This unique project is now described in a recent paper of ours in Biodiversity Data Journal. More than 100 taxonomic experts have participated in the identification of the material so far. Around 170,000 specimens, about 1 % of the total material, have been determined to species. What is unique about these data is that they are focused to a large extent on poorly known groups in the insect orders Hymenoptera and Diptera, groups that are rarely processed in similar inventories for lack of taxonomic expertise. The available SMTP data have recently been published to GBIF as 79 sample-based datasets, as described in another recent paper of ours, also in Biodiversity Data Journal.

Thanks in large part to the SMTP inventory, the known Swedish insect fauna has increased with 2,000 species in the last decade, to 28,000 species. Our recent analysis based on the inventory data suggests that as many as 5,000 additional insect species may still remain to be discovered in Sweden, many of them likely new to science. Most of the remaining species belong to Hymenoptera and Diptera, and many of them are decomposers or parasitoids. 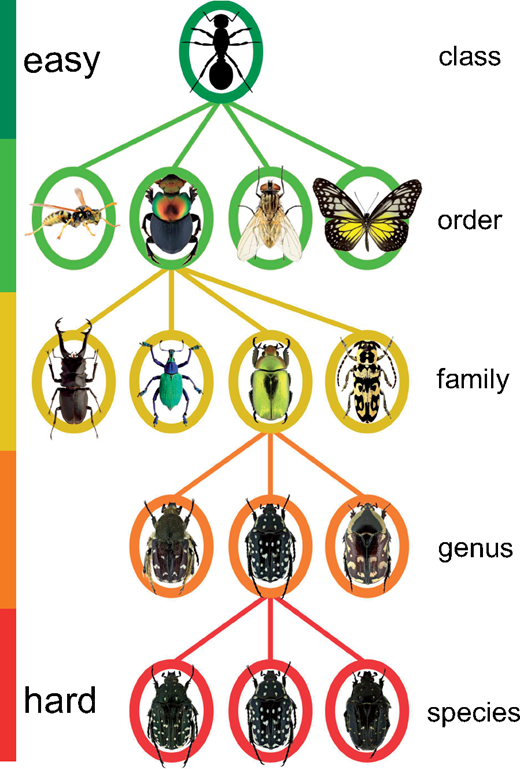 We are proud to announce that Miroslav Valan, one of the PhD students in the lab, was one of two winners of the 2019 Publisher’s Award for Excellence in Systematic Research. The award is presented to the two best papers based on student research published in Systematic Biology during the previous year. The lead author must have been a student at the time the research was conducted. Miroslav won the prize for his paper developing methods for automated image-based identification of insects based on convolutional neural networks and feature transfer. 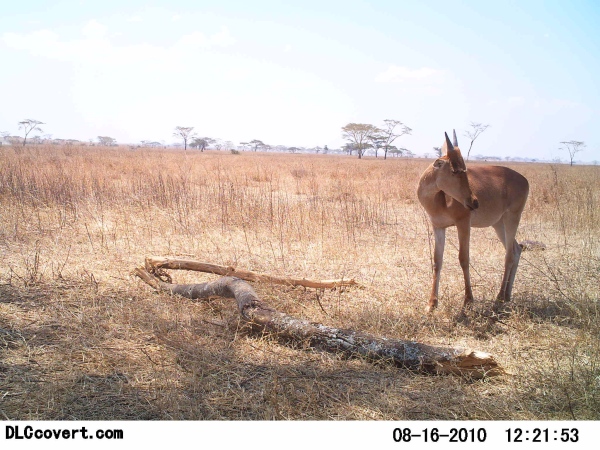 Miroslav Valan, one of the PhD students in the Ronquist lab, recently won the Hakuna Ma-Data competition sponsored by Microsoft. The task was to automatically identify species of wildlife in camera trap images from the Serengeti National Park. His contribution placed first among contributions from over 800 teams, earning him a $20,000 contribution to his research. Miroslav’s solution was presented at the prestigious computer-vision conference CVPR 2020.